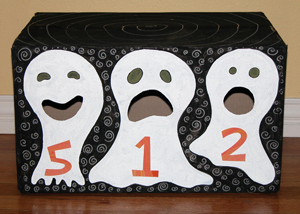 What to do with all that leftover Halloween candy? Toss it into the open mouths of these three greedy ghosts, and it becomes a fun game for one or a whole party!

1.|  Find a cardboard box and use tape to close the open end.

2.|  Use a pencil to draw three simple ghosts onto the box; give each ghost a different sized mouth.

4.| Next, cover the work area with newspaper. Paint the ghosts white and their eyes and the rest of the box (except the bottom) black. (Glitter can be sprinkled into the wet paint for an extra touch.)

5.|  Allow the paint to dry and, if needed, give it a second coat. After the box is completely dry, add designs to the black background with paint or a marker, if desired.

6.|  Now, cut three different numbers from orange paper and use a glue stick to adhere one to each ghost. These will be the points for getting treats into the mouths, so give the smallest mouth the highest number and the largest mouth the lowest number.

7.|  The greedy ghosts are ready to eat! Predetermine the number of tries each player will get and how far back they should stand. Then Trick-or-Treaters can take turns tossing treats into the ghosts gaping mouths, scoring points for each successful throw. (Use math skills to keep score and the game has a hidden educational bonus!)

8.|  When the game is over, players can reach into the mouths to retrieve the candy...if they are brave enough!

• Use cut paper instead of paint to create the ghosts.

• Simply paint or write the numbers on instead of using cut paper.

• Decorate the sides and top of the box with Halloween pictures or stickers.

• Leave the numbers off and fill the box with treats, for a Halloween decoration that dispenses party food or favors.

• To play in the dark, paint the ghosts with glow-in-the-dark paint, or put glow sticks inside the box.

• For a fair game when there are several players, only use candy that is all the same size (and unbreakable), such as salt-water taffy.

• Instead of trying to throw the candy in from a distance, place the box with the ghosts up so younger players can stand over it and drop them into the mouths.

• In place of candy, play with small inexpensive toys, like super balls or plastic spider rings.

• Award a prize to the winner; perhaps the contents of the box after the game.

• Make this project with witches or jack-o-lanterns instead of ghosts.

How to Make a Campfire Crown

Nothing says camping like a gooey s’mores goodness, so it’s only fitting that kings and queens of the campfire wear s’mores-themed crowns. Here are instructions to make campfire crowns for you . . .

This June award Dads and Grads with custom badges made from cupcake liners!SuppliesCupcake linersScraps of paper and/or old book pagesCrepe paper or ribbonsAlphabet stickers or stampsScissors (plain . . .

This Father’s Day tell Dad how much he is loved with handmade placards to display on his desk or dresser. Supplies Small gift box(es)Plastic letter magnetsAlphabet beadsSmall pieces of patterned . . .

Tell your dad how much you love him this Father’s Day with a fun recycled "Pop Art" sign! Supplies: Empty CD caseUnwanted book, comic or newspaperOld magazinesScraps of colored paper12 soda bottl . . .

Supplies: CardboardDuct tapeAlphabet stickersPencilCraft knifeScissors Here’s how:1.|  Start by deciding how large the letters will be; the ones pictured here are about 11” tall and 7” w . . .

It’s really fun to craft your own mini books. They make thoughtful gifts for birthdays, Mother’s Day, Father’s Day and more, or a unique place to record your own ideas and quotes. There is lot . . .

Create a unique memory book to save special keepsakes and photos—and to reminisce about all the fun you had this summer!Discussion Points for Parents/Teachers Talk about your favorite summer me . . .

Surprise Mom with this colorful art project that will light up her special day and make a cool piece of wall art for your home. Since the look is achieved from paint drips, each finished product is . . .

Make and Send a Hug to Loved Ones

Don’t you miss hugging people? Here’s a clever DIY hug craft that lets loved ones know they are missed! Whether it’s Mother's Day, Father’s Day, Teacher Appreciation, a birthday or some othe . . .

Create beautiful outdoor art using homemade paintbrushes from plants and items found in nature.Tips for Teachers/ParentsTeach children to respect living plants and only use found or discarded flower . . .

Marble painting is a great art project that encourages eye-hand coordination and muscle control. It’s fun to experiment with different colors and designs and it’s easy to adapt the project . . .

Brighten up a spring or summer day with a smiling sun craft made with colorful yarn and glue. This project also makes a festive Cinco de Mayo decoration. Get creative and make your own unique design . . .

This fun Star Wars-inspired art project uses paint and an egg carton to create a three-dimensional portrait of Baby Yoda. It serves as whimsical décor for “May the Fourth Be with You” celebrati . . . 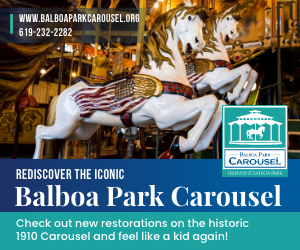