Just Say No to Vaping 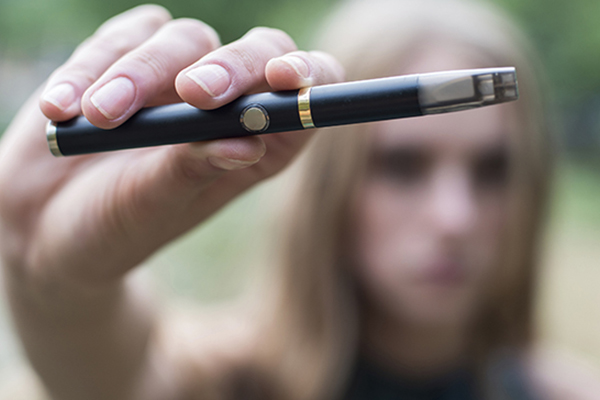 Get to know the dangers of vaping and e-cigarettes.

E-cigarettes contain potentially addictive, dangerous toxins. Would it surprise you to know that they come in kid-friendly flavors like bubble gum, fruit punch, gummy bears, cotton candy and watermelon? With thousands of e-flavors to smoke and hundreds of new, trendy e-gadgets to smoke them with, we are officially in an era of high-tech smoking. The stakes are higher than ever as “Big Tobacco” recruits a new generation of smokers—our children.

According to the California Department of Public Health (CDPH), the average age to start smoking in our state is 17. Middle school students are more than twice as likely to experiment with e-cigarettes than traditional cigarettes and almost nine percent of 8th graders are already using them. By 12th grade, that number doubles.

Recently released data by the Center for Disease Control and Prevention shows that e-cigarette use among young people has surpassed traditional cigarette use for the first time. If you don’t understand the new trends and products within this multi-billion dollar industry, it’s time to educate yourself and your kids on the dangers of e-cigarettes and the savvy marketing that surrounds us.

What are e-cigarettes?
E-cigarettes are battery-powered vaporizers that mimic the feel of traditional cigarette smoking. Vaping is the act of using one of these devices. Users heat up a liquid or “e-juice” (usually a combination of nicotine and glycerin) to create the aerosol, or vapor.

Some e-cigarettes are disposable and have a traditional cigarette-like appearance; others resemble pens or even USB rechargeable memory sticks. A plethora of reusable, smoking kit options are refillable with various cartridges or capsules of one’s favorite e-liquid. Many products also accommodate liquid cannabis (marijuana); e-hookahs (water pipes) are on the market as well.

“Almost all e-cigarettes have nicotine, and some of the e-liquids have caused acute poisoning [in] young children accidentally exposed to it,” says Wael Al-Delaimy, MD, PhD, chief of the Division of Global Health in the UC San Diego School of Medicine. “Nicotine is highly poisonous, especially in liquid form."

Many experts feel that e-cigarettes offer an easy gateway to both traditional tobacco and pot smoking. As for e-cigarettes that claim to be nicotine-free, The Food and Drug Administration (FDA) lab tests have, in some cases, shown otherwise. E-cigarettes can also release other impurities, such as metals, known to be toxic or carcinogenic.

Swallowing even small amounts of liquid nicotine, or absorbing it through the skin, can be lethal. The rate of accidental poisonings from e-cigarette products, mostly of children under 5, has skyrocketed in recent years. Currently, federal regulations do not mandate child safety caps on these products.

How are they being marketed?
Along with a massive assortment of kid-friendly flavors, e-cigarettes are also marketed through celebrity endorsements and social media avenues. Viral YouTube videos displaying “vape tricks” promote vaping as hip, cool and contemporary. To reach the millennial audience (known for tuning out traditional advertising), companies are using creative methods that intermingle advertising with entertainment. Even smartphone apps can carry these media messages.

Though pending, there are no federal e-cigarette regulations at this time. So, unlike traditional cigarettes, there are no health warning label requirements, no TV advertising bans and no marketing-to-kids restrictions. In fact, e-cigarettes are most likely to be found right next to the candy or ice cream displays in convenience stores—and are also available online.

“Part of the fascination [of e-cigs]is that it hooks into the tech trend,” explains Caroline Knorr, parenting editor with Common Sense Media, an organization that helps families develop critical media skills. Knorr explains that one thing that tends to fly under parents’ radar is how products get a millennial buzz.

Like all trends, peer pressure matters. As new smoking products overtake traditional tobacco, kids tend to be more interested in what their friends have to say about it than parents. Talk to your kids about resisting peer pressure and making their own decisions.

Model the behavior you’d like your children to emulate. In other words, don’t smoke if you don’t want your kids to. Teach your kids that ingesting potentially dangerous substances is harmful to their developing bodies and brains and can have long-term effects.

“Help your kids develop media awareness and savvy,” says Knorr. “Give them the opportunity to critically view and make conscious decisions about what they want to buy, making healthy choices.”

What are the health risks?
When it comes to warning the public about the health risks of vaping, a recent CDPH campaign “Still Blowing Smoke” is sending a clear message: “E-cigarettes pose risks to health, turn kids into addicts, and give Big Tobacco big opportunities. Wake up.”

The campaign shares that e-cigarettes can contain even more particles (they call them “tiny balls of evil”) than tobacco smoke and can cause as much (or more) short-term inflammation in the lungs as regular cigarettes. Other concerns include asthma attacks, a decreased immune system, heart disease, irritation of the throat and eyes, cough, nausea, vomiting and dizziness.

At this point, nobody really knows the full impact of e-cigarettes on children’s health, but several things seem obvious. E-cigarettes are not a healthy alternative to tobacco smoking and more studies are needed to fully understand the long-term health effects of vaping. Strict federal regulations are essential to protect the health of our kids. For now, the bottom line is talk to your kids about e-cigarettes. Today.