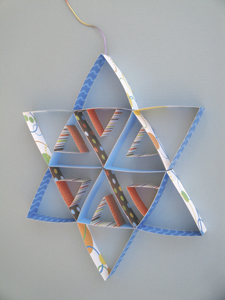 1.|  To create the strips of paper, line a ruler against one edge of a piece of cardstock, and then trace along it with a pencil, creating a shape about 1” wide and 12” long.

2.| Use scissors (or a craft knife) to cut the strip off the paper.

3.| Repeat the first two steps on the desired colors and patterns of paper until there are 15 strips, each measuring about 1” wide by 12” long.

5.| Fold the 12” strips into triangles one–at-a-time by laying the ruler 4” in on one side and folding the strip over the end of the ruler. Spin the strip around and measure and fold in 4” on the other end.

6.| Use fingers to crease the folds and perfect the triangle shape; secure the open ends together with clear tape.

7.| Now, to make small triangles out of the six 6” strips, measure and fold 2” in on both sides of each strip. Crease and tape them together.

8.| Next, use double-sided tape to adhere six of the large triangles together to form a hexagon (the center of the star).

9.| Then, use double-sided tape to adhere the six smaller triangles inside the large ones as shown here.

10.| Also use double–sided tape to adhere the last six large triangles to the outside of the hexagon to create the points of the star.

11.| To hang the star, use a sharp pencil to carefully poke a small hole in the center of one point of the star, then thread one end of a length of string through the hole and tie a small knot to hold it in place.

More Ideas:
• Use only solid-colored cardstock for a more serene version of the star.
• Hand-color or draw designs on sheets of white cardstock to use for this project.
• Double-sided scrapbooking paper is perfect for this project. Look for sheets with Hanukkah prints.
• For a “greener” version of the project, and a totally different look, use recycled cereal and food boxes instead of cardstock.
• Hang many stars on different lengths of string from the ceiling to decorate a whole wall or room.
• To make smaller versions of the star, use shorter strips of paper and then fold them in thirds to form triangles.
• Use little versions of the star as pretty additions to gift-wrapping.
• Use poster board to create giant stars.
• For a quicker project, eliminate the six smaller triangles.
• For a more advanced project, create several more consecutive sizes of triangles to add inside each large one.
• Add glue and glitter to the edges or sides of the cardstock for a sparkling star.
• Embellish the star with stickers, sequins or rhinestones.
• For even more detail, add beads or small stars to the hanging string.
• Use only white cardstock to craft snowflakes instead of stars.
• This project is a fun way to demonstrate and practice math skills such as measuring, fractions and basic geometry.

---------------
Pamela Maxwell is an artist, author and mother of two busy little boys. Her craft and scrapbooking projects have appeared in numerous books, magazines and on television programs. Photo by Pamela Maxwell.

Count down to Hanukkah with this fun and easy craft—a menorah made with paper towel tubes and a few decorative supplies. Put a toy into eight of the tube “candles” to be unwrapped each night. . . .

Art with Alyssa: Star of David

Get the kids involved in decorating for Hanukkah by designing a menorah with wooden blocks. Discussion Points for Parents/Teachers Talk about Hanukkah family traditions. Talk about the symbols . . .

These crayon holders are perfect for the kids’ table for Thanksgiving, Christmas or any winter-themed party or gathering. The kids can decorate the crayon holders first (two free, printable pic . . .

Make and Send a Hug to Loved Ones

Don’t you miss hugging people? Here’s a clever DIY hug craft that lets loved ones know they are missed! Whether it’s Mother's Day, Father’s Day, Teacher Appreciation, a birthday or some othe . . .

This is a fun Christmas craft for families that offers plenty of room for imagination and creativity! Use mini strands of tinsel to make glittery trees or twine for a more rustic look. Smaller trees . . .

Everyone loves advent calendars that reveal a daily surprise—it's also really fun to make them! Start your own family traditions in the days leading up to Christmas (or any cel . . .

These pop art candy decorations were made to create an amazing Candy Land-themed house in Clairemont Mesa (San Diego). They’re inexpensive to make and have multiple uses as they can also be used a . . .

Create a yarn painting featuring the season's favorite festive flower, the poinsettia. Find books about poinsettias at your local library to learn more about them. Did you know? Poinsettias are nat . . .

This cute sock snowman craft is easy enough to make with the kids from items you probably have on hand at home. Thank you to Deborah at Super Moms 360 for sharing her project with us.Supplies 1 l . . .

Kids can create great winter greeting cards while they enjoy a mug of hot chocolate with marshmallows. Just put out some paint, colored paper and a few extra marshmallows for stamping! Su . . .

Start a new family tradition by filling a decorated jar full of thanks. Expressing gratitude is (or should be) a year-round activity! Using a thankful jar at Thanksgiving? Give each guest one or mo . . .

Plan a day to craft Thankful Turkeys with your family. A little creativity combined with time reflecting on what you’re grateful for quickly transforms this adorable turkey into a festive and meanin . . .