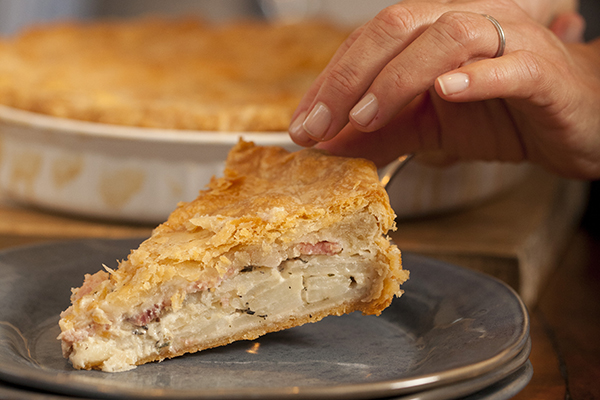 Potato Bacon Torte is Melissa d’Arabian’s signature dish, and may even be the recipe that secured her own cooking show (Ten Dollar Dinners) on “The Next Food Network Star." Try making it for Mother's Day, Father's Day or any special occasion brunch.

Directions
To make the crust: Place the flour and salt in the bowl of a food processor and pulse to combine. Add the butter and process just until the mixture resembles wet sand, about 6 seconds. Add the ice water, 1 tablespoon at a time, pulsing after each addition, until the dough begins to come together in large clumps. Divide the dough evenly between two quart-sized resealable bags, seal, and gently knead and pat each into a flat disk. Refrigerate the dough disks for at least 30 minutes or overnight.

Preheat the oven to 375°F. Lightly dust your work surface with some flour. Remove one dough disk from the refrigerator, take it out of the bag, and set it on the floured surface. Roll the dough into a 10-inch circle that’s between 1/8- and 1/4-inch thick. Gently drape the dough over the rolling pin and lift it over and into a 9-inch pie plate. Fit the dough into the edges of the pan and set aside.

Season the top layer with the remaining tarragon, salt, and pepper and lay the bacon strips over the final layer of potatoes. Slowly drizzle 1/2 cup of the cream evenly over the top layer, letting it seep down before adding more, if needed (add enough cream so the liquid nears the top of the potatoes—you don’t want it to overflow). Set aside.

Roll the second dough disk into a 10-inch circle that’s between 1/8- and 1/4-inch thick, drape it over the rolling pin, and gently lay it over the top of the torte. Press down on the edges to seal and then crimp the edges by pinching them with your thumb and forefinger. Use a paring knife to make two or three small slits at the center of the top crust and place the torte on a rimmed baking sheet.

Brush the top crust with the remaining 1 tablespoon cream. Bake until the top crust is golden brown, about 1 hour, tenting the torte with a sheet of aluminum foil if it looks like it’s getting too dark. Remove the baking sheet from the oven and place the torte on a wire rack to cool for at least 30 minutes before slicing. Serve warm or at room temperature.

Looking for ways to jazz up snacktime at home? Have fun making healthy snacks with the kids. Let them get creative and design their own flowers made with fresh fruit. Have plenty of cut fruit availa . . .

Fly like a butterfly with this healthy snack that’s fun to make and eat! My family likes creating afterschool snacks together and making food allergies fun. We call it Snacking with Joy. This reci . . .

Kids will love surprising mom (or grandma) with this adorable flower cake for Mother’s Day or a birthday! Kids will need help with baking, but let them get creative when it comes to decorating. Th . . .

This Pistachio Torte is an easy green treat the kids can help make for St. Patrick’s Day or any springtime occasion — it's one of many delicious desserts featured in The Ultimate Kids Baking Boo . . .

Potato Bacon Torte is Melissa d’Arabian’s signature dish, and may even be the recipe that secured her own cooking show (Ten Dollar Dinners) on “The Next Food Network Star." Try making it . . .

Celebrate Cinco de Mayo with tilapia tacos from Food Network chef and local mom Melissa d'Arabian. She shares some of her favorite Mexican recipes, including two from her best-selling cookbook "Ten . . .

Perfect on days you want a lower-carb alternative to a sandwich. Let’s face it—on most sandwiches the filling is the star, so using a lettuce leaf in place of bread makes sense. Find more health . . .