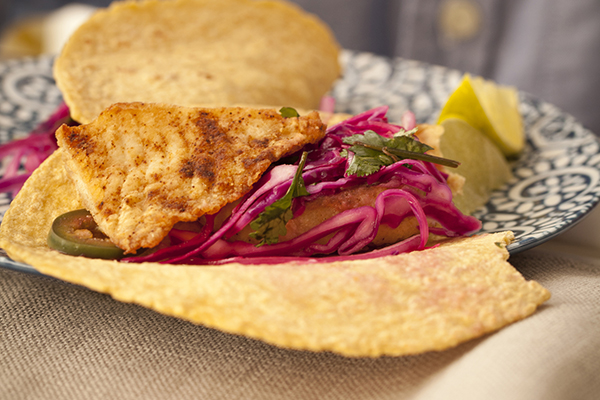 I grew up in Tucson and probably ate my first fish taco before I could even talk! Serving fish tacos is a superb tactic for taking a relatively small portion of fish and making it seem abundant. Red cabbage quick-pickled with some white vinegar turns the most breathtaking shade of fuchsia and is a cheap and tasty thrill. If kids are joining you at the dinner table, consider omitting the jalapeños or removing the seeds for a less heat. The slaw keeps up to three days, during which time it will continue to be spicier and taste more pickled.

To make the slaw: Place the cabbage, onion, jalapeño, and cilantro in a medium bowl. Slice the lime in half lengthwise and then cut one half into 4 wedges; set aside for serving. Juice the remaining lime half into a small bowl. Add the vinegar, sugar, and salt and whisk to dissolve, then pour the vinegar mixture over the cabbage mixture. Toss and squeeze with your hand to combine and set aside. Stir and squeeze the slaw every 5 to 10 minutes while you prepare the fish.

Heat the oil in a large skillet over medium-high heat. Add the fish and cook until golden and crisp on both sides, 4 to 6 minutes total. Use a spatula to transfer the fish to a plate and set aside.

Heat a medium skillet over medium-high heat and place a tortilla in the pan. Cook the tortilla until it’s warmed through and pliable, 30 seconds to 1 minute, turning it over midway through. Place the tortilla on a kitchen towel–lined plate and wrap loosely, folding the edges of the towel over the tortilla to keep it warm. Repeat with the remaining tortillas, stacking and covering them as you go. Place 1 piece of fish inside each tortilla, top with cabbage slaw, and serve with a lime wedge.

Celebrity chef, television host, author, and mom expert Melissa d’Arabian earned her MBA and worked in corporate finance and strategy before becoming a stay-at-home mom to four daughters. After winning The Next Food Network Star in 2009, Melissa launched Ten Dollar Dinners—a popular Food Network television show followed by a New York Times best-selling cookbook. Her newest projects include a FoodNetwork.com web series, “The Picky Eaters Project: Melissa’s Mealtime Redesign” and serving as a regular judge on Food Network competition series, Guy's Grocery Games. Melissa lives in Coronado with her family. Stay in touch with her on Facebook, Twitter, and Instagram.

Looking for ways to jazz up snacktime at home? Have fun making healthy snacks with the kids. Let them get creative and design their own flowers made with fresh fruit. Have plenty of cut fruit availa . . .

Fly like a butterfly with this healthy snack that’s fun to make and eat! My family likes creating afterschool snacks together and making food allergies fun. We call it Snacking with Joy. This reci . . .

Kids will love surprising mom (or grandma) with this adorable flower cake for Mother’s Day or a birthday! Kids will need help with baking, but let them get creative when it comes to decorating. Th . . .

This Pistachio Torte is an easy green treat the kids can help make for St. Patrick’s Day or any springtime occasion — it's one of many delicious desserts featured in The Ultimate Kids Baking Boo . . .

Potato Bacon Torte is Melissa d’Arabian’s signature dish, and may even be the recipe that secured her own cooking show (Ten Dollar Dinners) on “The Next Food Network Star." Try making it . . .

Celebrate Cinco de Mayo with tilapia tacos from Food Network chef and local mom Melissa d'Arabian. She shares some of her favorite Mexican recipes, including two from her best-selling cookbook "Ten . . .

Perfect on days you want a lower-carb alternative to a sandwich. Let’s face it—on most sandwiches the filling is the star, so using a lettuce leaf in place of bread makes sense. Find more health . . .