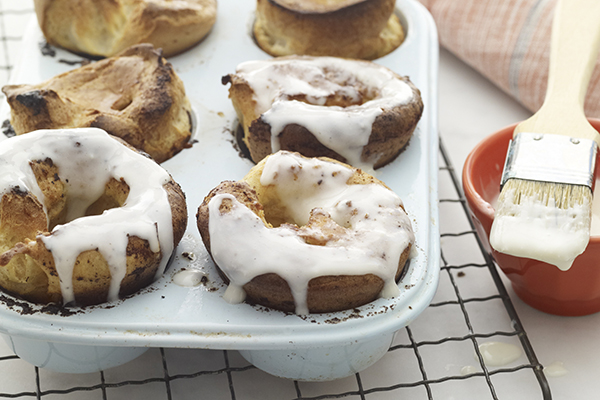 Making treats from scratch is one of Melissa d’Arabian’s tricks to monitoring what her daughters eat. She created this easy recipe because her girls love all things related to cinnamon rolls. There is just enough cinnamon sweetness to satisfy a cinnamon roll craving for kids and adults.

2. Add the eggs and granulated sugar to a blender jar and mix on medium speed until light yellow. Add the 1 cup warmed milk and blend. Add the flour, cinnamon and salt; blend until smooth.

3. Use a pastry brush to grease the hot muffin tin generously with the melted butter. Add any remaining butter to the batter and pulse to blend. Pour the batter into the warmed muffin tin, filling the muffin cups about three-quarters full. Bake until the popovers are golden, about 20 minutes. (Do NOT open the oven door!) Turn off the oven, keep the oven door closed, and continue to bake the popovers until golden brown, 10-15 minutes.

4. Meanwhile, in a small bowl, whisk the cream cheese with the confectioners’ sugar and the remaining 2 tablespoons milk until smooth. Remove the popovers from the oven. Use the tip of a paring knife to poke a tiny slit at the top of each popover (this will allow steam to escape, and will keep your popovers from getting soggy). Brush the popovers with the glaze and serve warm.

Reprinted from Supermarket Healthy: Recipes and Know-How for Eating Well Without Spending a Lot. Copyright © 2014 by Melissa d’Arabian. Photographs © 2014 by Tina Rupp. Published by Clarkson Potter, an imprint of Random House LLC.

Celebrity chef, TV host, best-selling author and San Diego mom Melissa d'Arabian is an expert on affordable and healthy home cooking. Melissa is well-known for her “Ten Dollar Dinners” show and cookbook, and as a judge on Food Network's “Guy’s Grocery Games.” Her cookbook "Supermarket Healthy” is available at www.melissadarabian.net/books/supermarket-healthy.

These beautiful Italian 7-Layer Bars are cut into small squares and individually dipped in white chocolate, so they look like petits fours! They’re perfect to give as gifts to friends, neighbors a . . .

Melissa d’Arabian's Cinnamon Popovers with Cream Cheese Glaze Making treats from scratch is one of Melissa d’Arabian’s tricks to monitoring what her daughters eat. She created this easy recipe . . .

Homemade lollipops are fun valentines treats for kids to pass out to their friends and neighbors. The strawberry flavor makes them extra special, but choose whatever flavor you like best. Makes 12 l . . .