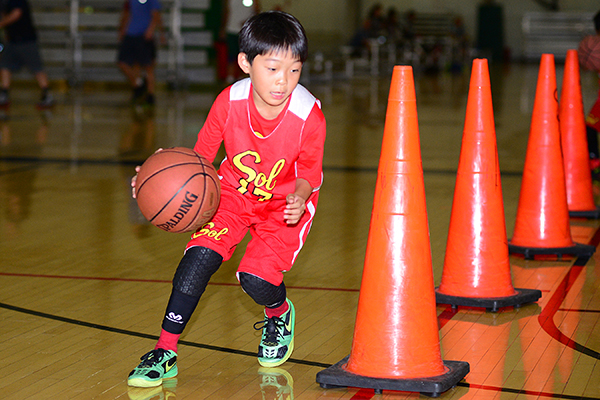 Tyler’s mother, Melanie Sheridan, is a big supporter of her son. She encourages parents to get their kids involved in sports. “Know and consider your child’s personality, talents and limits,” she says, noting some kids thrive in team sports while others are better suited to individual activities.

Benefits
Whether kids practice hitting, dribbling or tumbling, they learn a lot about themselves.

“The biggest benefits are building confidence in trying something new, participating as a team, [having a] sense of belonging and meeting new friends,” says Courtney Pendleton, Association Director of Public Relations & Communications for YMCA of San Diego County.

Recreational vs. Club Sports
There are important differences between recreational and club sports. Recreational sports are more for fun and fitness, while club sports have the added distinction of being more competitive and require a bigger time commitment.

Recreational sports are played seasonally, have traditional practice and game schedules, may not require tryouts, and teams are often coached by volunteers. For these reasons, fees are generally lower. In comparison, club sports are often played year-round (and therefore, have more practices and games), require tryouts, participate in tournaments, may involve travel, and usually have paid, experienced coaches.

Getting Started The YMCA offers a range of youth sports including youth soccer, swim, basketball, lacrosse, flag football, gymnastics and more. They also have a six-week sports program where toddlers can try a variety of sports.

“The focus is not on winning, but rather character development, having fun and basics of the game,” says Pendleton. “Naturally, if a child shows a keen interest in a sport, it makes it easy to try. But trying something new is also great for development of the whole child.”

Ease into sports to help children get adjusted and learn the basics, such as rules of play.

“Look for programs that are not really intense and see if they like it,” says Cleveland, noting San Diego Sol’s Pee Wee Program for kids ages 5-7 includes one practice and one game per week. “We range from beginners to advanced,” she says. “We teach everyone.”

Cleveland urges parents not to push their kids. “Sit back and enjoy the game,” she says. “Be a support on and off the court and listen to your kids. I want parents to enjoy the process because it goes fast.”

Things to Consider
Sheridan encourages parents to ask experienced families about the culture of the sport they’re considering, including whether the sport is recreational or competitive. Even though most sports have a season, ask if there may be calls to play in off-season tournaments, clinics or camps. Kids may want to join travel teams in the off-season, which costs more.

Sheridan says parents also need to consider the schedules of other family members, including siblings who may want to play sports, too.

Think about health and safety factors. Does the sport pose any health risks for the child? For instance, a child with asthma might do better swimming than doing a sport that requires running. Consult your pediatrician with questions.

Check it Out!
Want to see what a new sport is all about? Here are ways to explore the sporting world:

Catch a game or performance. Go to your local park on a Saturday to watch soccer; get tickets to a dance recital; catch a high school basketball game; or go to a college or professional game.

Watch YouTube. Type a sport’s name and a question, like “how to do karate” or “what is flag football” into Google. Note to parents: Watch videos before your child does, in case something is inappropriate or dangerous, such as a failed stunt.

Take a Field Trip. Check out local museums and exhibits about sports. The Chula Vista Elite Athlete Training Center offers tours where kids can learn about BMX, archery, track and field, and other sports. The Sullivan Family Baseball Research Center at the San Diego Central Library is a treat for baseball enthusiasts. The California Surf Museum in Oceanside may inspire youngsters to catch a wave. Afterwards, hit the beach to watch surfers in action.

Learn from the Pros. The San Diego Padres offer five-day baseball camps for kids ages 5–12 during the summer. The San Diego Gulls offer a “Learn to Play Hockey” program, a four-week primer for first-time players ages 4–12.

Read more about the benefits of team sports versus individual sports at www.SanDiegoFamily.com/resources/afterschool-activities.

Kristen Castillo is an award-winning freelance writer whose favorite sport is baseball. She lives in Chula Vista with her family.

Are your kids interested in developing a new skill or discovering a new hobby? Our 2022 Arts & Sports Guide offers a variety of fun activities that will get hearts pumping and creative juices fl . . .